Neither Villain Nor Victim
11 Comments 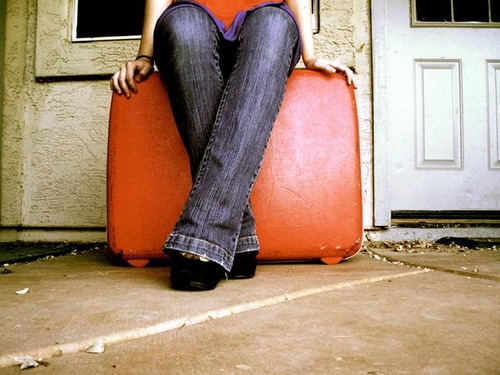 When I tell people I was once homeless, I feel them take a deep breath and pause. They are waiting for me to continue, to share my story. And for a long time I wanted to do that. But it’s been over a year since I first decided I wanted to write about it. Every time I tried to share my story I couldn’t do it.

When I sat down to write it felt like I was torturing myself. I recalled conversations I once had, emotions I felt, and memories I hoped I’d forgotten. And when I couldn’t finish I would simply tell myself this proved I’m not a good writer. Or that I shouldn’t share my story. Or simply didn’t have a story to tell. Now I understand that this feeling –like I’m not good enough and not in control of my life – is what I felt right up until the moment I was forced to leave my family home, aged 17, accompanied by my 15-year-old brother, over 10 years ago.

At the time, I never called myself ‘homeless’. To be honest, I didn’t really know what homeless meant. If you’d asked me, I would have quoted the stereotype: people living on the streets in sleeping bags with no food or money; probably alcoholics or drug addicts. When I walk past homeless people on city streets now, I feel a sense of guilt. Guilt that I never slept a night rough and managed to get the life I wanted. But mostly I feel guilty because I don’t know how to fix the problems that cause homelessness: poverty, gender inequality, mental illness and a lack of affordable housing – to mention just a few.

It wasn’t until last year – after I had a chance conversation with a homeless teenage girl in a public bathroom and saw myself in her – that I researched ‘homeless’ on the internet. Like her, I became homeless for all the usual reasons but I didn’t conform to the stereotypes. This is why it took me so long to begin using the term to tie my story together.

There are only two roles I can play in my own story: villain or victim. I’ve been called both, but I’m neither. We see these roles played out in the media every day: the drunken homeless man taking taxpayers’ money. Or the beaten housewife with two kids hiding in a homeless shelter. To my school counsellor, I was the villain, told to go home and apologise for whatever I had done to my mum to have her kick me out. Handing me a box of tissues, she told me that no-one would help an under-aged kid. So I should go home and grin and bear it. She was the first of many who tried to convince me that accepting my life was the best, and easiest, course of action.

To the social worker at Colony 47, a support service for young people in Tasmania, I was a victim, a person who needed money to pay the bond on a rental house. He gave me as much white bread, cheese sandwiches and Milo as I could consume. I always left his office armed with vouchers, phone-numbers of services I could use and people I could contact. He told me I’d done the right thing; told me life would be better now.

To Centrelink, I was both villain and victim. I was made to tell my story so many times I couldn’t remember what I’d said anymore. I felt like I was repeating someone else’s story. I found myself saying, “Well, if it’s in your notes I must have said it; I’m not lying.” At first I tried to be neutral, to tell just the facts. But that wasn’t enough. They wanted to know the real reason I’d left. If I didn’t have one that was good enough they’d refuse me benefits, forcing me to go home. I agonised for days about what I was going to say. In the end I felt I had no choice.

I told them my reasons. In doing so, I made my own mother the villain and took my place as the victim. I knew it wasn’t that simple, but I couldn’t defend her because every time I did they asked me why I would want to. They made me sign my name under my statement.

Just when I thought the process was nearly over, they told me I had to live with my dad during the summer holidays. I hadn’t spoken to him in years. Luckily, I had his phone-number on a scrap piece of paper just in case one day I needed him. I decided this was such a day. I stood at a pay phone, feeding it silver coins as I explained my situation. I asked him to tell Centrelink he didn’t want us. To do me this one favour. And he did. My body relaxed with relief when Centrelink told me my dad was an unfit guardian.

Once the procedures were over I was on my own, ushered out the door so they could get back to their cups of tea and weekend gossip. To this day, I’ve never thanked my dad directly for what he did. And I’ve never asked my mum how she responded to my statement when Centrelink called to verify it. But I’m guessing she confirmed everything was true, because I got a government allowance and my independence.

Most teenagers can’t wait to move out of home; I was no different. I hadn’t really imagined what it would feel like, so when I found a two-bedroom unit after months of sleeping at my then-boyfriend’s mother’s house, I should have held onto that feeling of accomplishment. I should have celebrated. Instead, I ordered us Domino’s and we sat shoving our faces with pizza in our lounge room, which I’d managed to furnish.

Then my brother broke the crisper trying to shove the leftover pizza, still in its boxes, into the fridge. This was my first inkling into what it was going to be like being my brother’s keeper; his guardian. And, for the most part, that’s what I concentrated on being during those next few years: I worked extra shifts to pay the bills, I learnt to cook so I could feed him healthy meals, and I studied hard at university to show him that you can change your life if you remain focused.

But at no point did I put myself first, think about how I felt or how I saw myself. I just became whatever role people expected, or what was required of me. And by doing so, despite how far I’d come and all my best efforts, I allowed my past to retain some of its control over me.

So that’s what this story is: a chance for me to finally let go of the self-doubt and negative emotions and step out of the roles I’ve been given. Because everyone who has been homeless is both a villain and a victim. We are forced to do things we don’t want to do and become people we don’t like to get what we need to survive. We play up our situation to gain access to free resources, we lie to friends and family about where we’ve been, and keep our mouths shut when we should speak out. We are forced to do things like this because society likes stereotypes and blaming symptoms instead of causes.

But I was never going to be a stereotype. Today, I have a home, a loving partner and two tertiary degrees. I’ve travelled the world and run my own business. My brother is just as happy and successful. We don’t talk about the past. But we are both closer because of it. And we both know that whatever happens in the future we will have each other’s back. I also have a good relationship with both of my parents. Over time, I think we’ve forgiven ourselves because leaving home was the best thing that ever happened to me. In a roundabout way, it set me free.

For years I was told that my home life was normal, and that people have to accept what they’re given. In the same breath I was told you can be anything you want to be, and that life’s possibilities are endless. Now I see that the people who told me these things were scared that someone in my position could free themselves of assigned roles, take control of their life and change it. Because this would mean they would need to change the way they understand the world and navigate their lives.

They would need to stop thinking of homelessness in terms of villains and victims – control and weakness – and accept that my story might not be one they want to hear. A story I’ve now shared.

This piece was originally written for and is featured in the 501 edition of The Big Issue.