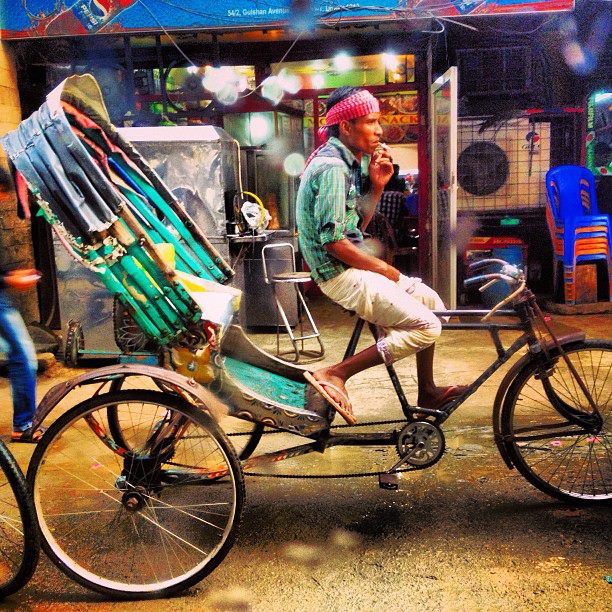 As I leave my house my ears are flooded with long beeps, dinging bells and children’s laughter. I step outside my apartment block and weave my way through the traffic – cars, rickshaws, buses, bikes and those moving on foot. A child holds tightly onto her father’s hand. He swings her arm above her head as she skips over mounds of rubbish, mud and water that have formed mounds at the edge of the road. She wears a blue and white school uniform, not yet covered by food and dirt from the day’s activities, and her father carries her red backpack over his shoulder.

I hear the sound of the weathered transport bus humming towards me. Its paint is flaking off and the remaining sheets have begun to curl towards the sun. The bus is full – a blur of sweaty faces and collared shirts. Some men dangle from the door frame and the limbs of others protrude from the windows. The bus slows down at the corner just enough to let people jump from its exit. The passengers hit the ground before darting to the side of the busy street as the bus turns out of sight.

Rickshaw walas have formed a queue and they beckon me. They call out ma’am and try to usher me to climb aboard with a simultaneous nod of the head and swish of the hand. I make eye contact with one man and nod in reply. I climb on. Tucking my bag into my lap, I fold my arms over it and check my orna isn’t trailing behind. I don’t want it to get caught in the rickshaw’s wheels. I say, “Gulshan ek marketa jabo” and we are one our way.

The warm air spiced with garbage, dust and moisture fills my nostrils. I grab the seat to stop myself from bouncing around as the rickshaw wala swerves across the road to avoid potholes and muddy patches sealed with chunks of red bricks. He wears a purple and white striped shirt that is damp from sweat and has begun to go see-through in-between his shoulder blades. It pulls tight at the elbows as his bulging arms strain to hold himself up as his tired legs turn the peddles. On his lower half he wears a light brown lungi that has maroon coloured strips. The hem is covered in 1cm of dried mud, cracked and powdery from the sun. His sandals are made of rubber. Two-sizes too big, they flick the rickshaw’s foot rest with every wheel rotation.

The streets are lined with modern, narrow but tall, apartment buildings. Some have tiny balconies decorated with pot plants and drying clothes, others have their windows bared and their curtains drawn. A security guard wearing a blue and green uniform hovers near the entrance of one apartment smoking a cigarette and kicking pebbles with his boots that are coloured black and laced above the ankle. Outside another building, a man washes a brand new Mercedes with a dirty rag and water bucket. The brown water runs off the car pooling in the gutter.

I pass a ‘western style’ clothing store. The manikins in the front window wear cropped jeans and short sleeved fitted shirts. They stand tall and white, the plastic glowing under the harsh lights. As I am carried down winding streets lined by trees, I notice Japanese, Korean and Indian restaurants; all quoting their cuisine as authentic. A child calls out, “hellooo how are youuuu?” to me as I go past an international school. I say hello back and he runs over to his friends who all turn around to stare at me.

Women in patterned Saris and Salwar Kameez walk the road sweeping dust and rubbish away with brooms made from wiry sticks. One woman looks up at me. Her gold nose ring dominates her small face. She smiles showing me her red toothy grin and then spits what is left of the Paan beside her feet. Men on their way to work rest their hoes over one shoulder. Woven baskets dangle from the end of the metal hook swaying to the rhythm of their strides.

I reach the market say, “dhonnobad” and pass 30 taka to the rickshaw wala as I slide off and walk towards my office.

A construction site has consumed the street. The building, held together by bamboo scaffolding and rope, is empty. The workmen are having breakfast at a makeshift cha stall. Its roof made of corrugated iron juts out of a brick wall. A man, barely visible behind bunches of bananas and bags filled with bread hanging from the roof, cracks eggs onto a hot plate while his friend rolls dough and grates potato.  The work men hang around drinking milk tea and gossiping, waiting for their breakfast to be served on plates rinsed in tubs of soapy water.  The smells of oil and salt make me wish I could eat the street food.

I step over a stray dog with fresh battle wounds sleeping in the drive way of my office. It shows me no interest even when I close the heavy metal gate behind me.