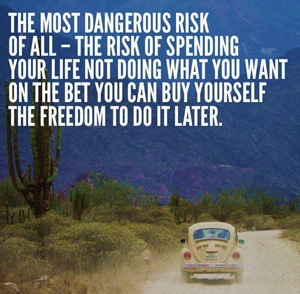 I don’t see myself as a risk taker. But a few months ago I read a quote and it made me sit up and think. I realised that I could be taking the biggest risk of all – putting my dreams on hold in the hope I will have the chance to follow them later.

But what if ‘later’ never comes?

So at the first opportunity I decided to risk it all, by conventional standards, to go after my dream. I thought to myself: what’s the worst thing that could happen? I have everything to gain- happiness, fulfillment and knowing what I’m doing is right.

My dream has always been to be a writer. I want to use my words to tell stories that otherwise would be left untold. I first decided I wanted to be a writer when I was about 10 years old. I was watching an ABC documentary on female genital mutilation in Ethiopia with my mum. I actually watched most of it through the cracks of my fingers as I had my hand to my face ready to hide behind if it got too much. It was shocking and confronting for me to watch another girl go through what can only be described as brutality. When the program ended I asked my mum why they would do that to a girl. She replied she didn’t know. I was furious.  After that I thought to myself I’m going to find out and then tell everyone.

The years since have been carefully planned in the hope that it would lead me to my dream. I read as much as I could. I went to university and I’ve spent the last five years working in marketing and communications across various sectors.

When I look back at my career I remember weighing up the risks of going after my dream against taking a job opportunity and sometimes I was forced to make sacrifices, like taking a role I wasn’t passionate in because I needed the money. I justified taking the safer path by telling myself I’d be able to save or that the organisation would look good on my CV and help me get my dream job later on. I kept doing this even when I had a feeling in my stomach that I wanted and needed more. Others told me I had all the time in the world to do what I wanted and I believed them. But as I’ve grown older and the years have merged together I’ve realised that isn’t true.

When I recently began working for NGOs I thought my dream had come true.

I’d never been so close to achieving it before.  I was passionate and eager to be finally writing stories that mattered. So I was shocked when the feeling in my stomach returned. Why had it come back? For months I wished it to go away. I was afraid if I said anything that I’d be told I need to learn to appreciate what I’ve got. When I did say something, people told me to stick with it. That it was a phase and you need to put in the hard time to get where you want to be. When I asked them if they were living their dream they shrugged or mentioned their next promotion or savings. I tried to push through but I recognised I was no longer being fulfilled and inspired. And it was starting to show. So when my contracted ended I decided I was going to risk it all to follow my dream.

Remember when I said what’s the worst that could happen? Well I never expected to chew through all my savings and become dependent on my partner. Asking him for money for the first time the other day made me feel pretty shit. He’s so supportive but I feel like I’m not pulling my weight in the relationship anymore. But the worst thing would have to be job hunting. I’m sick of getting called either over qualified or under qualified. Here I was thinking I was just plain old qualified. I fight with myself everyday over whether to even apply for a job – do it you need the money…wait don’t because it’s not what you want. Some days I doubt myself and my dream. I wonder why I can’t just be happy doing any old nine to five job. Others do it.  And then I remember the quote.

After a few months off I realise that while the last few years I’ve been writing, I haven’t really been writing as me – my voice, feelings and ideas.

And that’s what I’ve needed. I’ve also come to realise that I’m one of the lucky ones because I know what I need and I have a dream. While it’s been difficult so far – I often feel alone and people question my decision- I know taking a risk was the right thing to do. Putting off my dream any longer would be risker.

I think many of us put on hold the things we love in the hope to enjoy them later. But to do so is taking a massive risk. Because what happens if ‘later’ never comes?