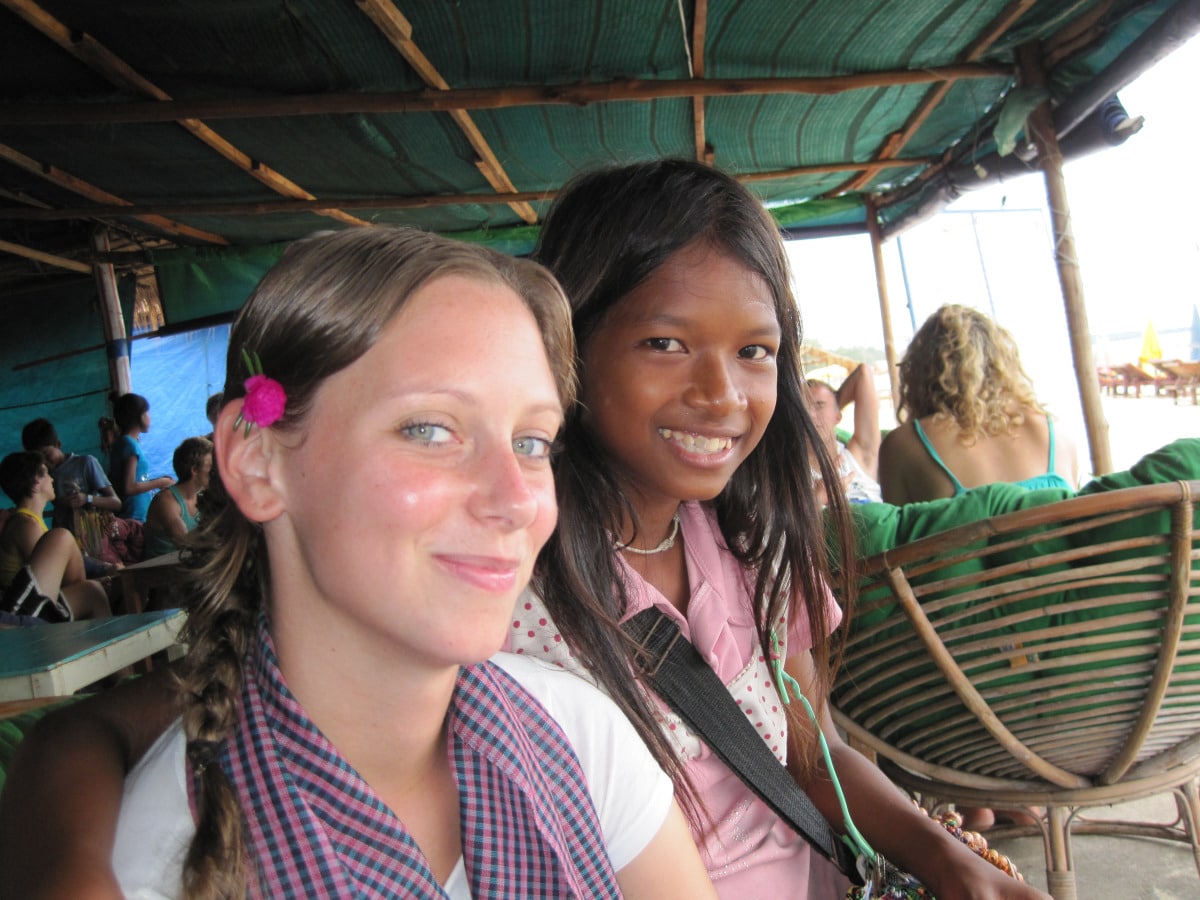 I STILL believe in promises, even the pinkie kind. When I promise I’m going to do something I always see it through. Sometimes I’ll say yes to a party invite or organise a Skype chat with a friend, then forget or bail but never If I said “I promise” and not if what’s being asked of me means something.

In 2009, on a beach called Sihanoukville in Cambodia, I made a promise to a 12 year old girl. She asked me to come back for her and I said yes. When I think back to that moment I feel guilty and sad. But mostly guilty because I’m not sure I can keep my promise.

We met a few days into my stay in Sihanoukville. I was lying on a deck chair dozing in the sun when a group of young boys came past and asked if I’d play a game of pool with them. Many of the children I met in Cambodia asked to play pool with tourists. If the tourists won then they were able to choose a bracelet or book for free- whatever the child was selling- but if the child won, their opponent had to buy something from them. I can’t play pool. I’ve never have had the patience to learn so I said no. They asked a few more times calling me names trying to bait me. I still declined. Suddenly one of the kids, a small boy maybe aged 9, started yelling and grabbing at my bag. I got hold of my things and told them to go away. I tried to remain calm but the boy started to throw punches and kicks at me, his friends encouraging him from the side-lines. There was a large crowd of children surrounding me by this stage so I couldn’t make a hasty exit. Then one of the kids, a young girl, came forward and started yelling at the boys in Khmer. I still don’t know what she said but it worked. The group of boys gave me one last glare, turned and stomped off.

Next thing I knew her wicker basket covered in mangos was dumped on the deck chair and she was sitting beside me.  She told me her name. I tried repeating it but I couldn’t pronounce it properly. This made her laugh so hard she was squirming. So we decided on a name I could pronounce. Mango. Each day she would come and sit with me and I’d buy a mango.

We formed a quick friendship. She was 12 years old, although she looked about nine, and lived with two brothers and one sister in a shanty hut one hour’s walk from the beach. She went to a local school until noon then carried her enormous basket of mangos on her head -using the traditional Khmer scarf- to the beach to sell. Each day she hoped to make a few dollars and if she was lucky she’d make enough to hire a moto for $1 to take her home so that she didn’t have to walk in the dark.

We talked about everything- what it was like growing up in our countries, our favourite foods and our dreams for the future. On our last day together I passed her a handful of riel (riel is worth nothing outside of Cambodia) and told her to put it towards school books or her motos home. I hated the thought of her walking alone in the dark. She said “thank you” with the biggest smile on her face then she asked if I’d mind her basket of fruit for a while. About 20 minutes later she returned with a paper bag and gave it to me. When I looked inside it held three curried eggs -her favourite food. She said she wanted me to try one. I told her I wasn’t hungry and she could have them but she insisted. This simple gesture broke my heart.

I knew that in her current situation many of her dreams would never come true. She wanted to be a teacher, to travel and have a nice house with a proper kitchen and space for a hammock out the back. So when we were saying our goodbyes she took my hand and asked me to promise to come back for her. I promised I would. I thought if I could come back with money or adopt her that I could make her dreams a reality.

I think about her a lot because she was the reason I started working in the development sector.

Our conversations over those few days on the beach sparked a passion in me. I wanted to help her and all the children I’d met throughout my travels. When I was back in Australia I was lucky enough to get a job in an NGO. I thought to myself “This is it – I’ll learn how to fix everything and I’ll return to Mango and make everything better”. I soon realised that it wasn’t enough to change the individual children’s lives. Even if I adopted them and sent them money it wouldn’t protect them against the corruption, inequality, or lack of resources and wouldn’t buy them the education they deserved or the health care they needed. This was when I knew I may not be able to keep my promise.

When I’m alone and I think about how great and easy my life is I wonder how Mango is doing. Is she still selling fruit on the beach? Is she married? Does she have enough food to eat? Even if I went back to the beach and searched for her there is no guarantee I’ll ever find her. I guess I’ll never know.

After writing this I realise that the promise I made was to me as much as it was to Mango.

Maybe that’s why it upsets me so much. My dream is to give Mango a better life and Mango’s dream is to live one. What seemed like a simple promise I now realise will take a lifetime of work and then some.  Mango will never know if I’ve kept my promise or not. And I’m not sure if I can keep it but I know I have to try.