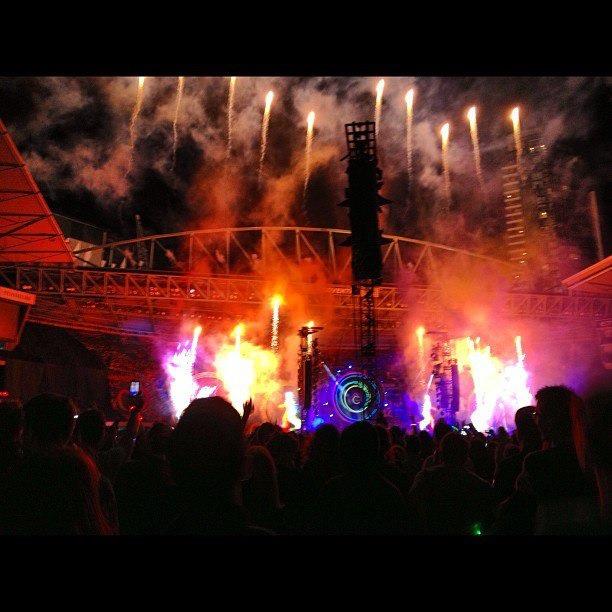 Both put on incredible, but completely different shows. Coldplay was pastels, twinkling lights, beach balls and blown up creatures. Radiohead was blankets of severe colour contrasted with darkness, DJ lights and Thom Yorke dancing. When both bands played my favourite songs I was ecstatic.

Radiohead and Coldplay are massive bands so when a few friends of mine asked me who Radiohead was my jaw dropped, and I gave them my best OMG really look. Shocked I scrambled for my phone and searched Creep and Karma Police on YouTube. They weren’t impressed, ‘what whiney music.’ Coldplay is no different I said. They disagreed. I was amazed at how firstly they were my friends (joking) and secondly that I could love both bands that in most ways are completely different.

Coldplay put on a light show for fans in Melbourne

Music is a beautiful thing

Like taste and smell it has the ability to conjure up memories and feelings. While music doesn’t discriminate by education, musical talent, age or gender it is truly personal. You can’t force someone to like a song or band and more often than not you find yourself defending your tastes. When I look back over the years I can define periods of my life by songs. Each period has a memory, a story and in most cases a completely different genre. 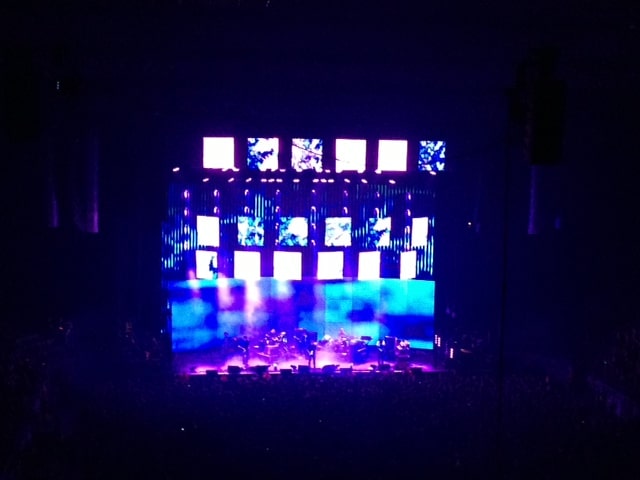 Radiohead playing Karma Police during their gig in Melbourne

The first song I remember is True Colours by Cyndi Lauper.  I used to hear my parents hum it sometimes. I didn’t know what it was so I asked my nan. She got me to hum it to her, and she told me my parents used to sing it to my sister before she passed away.  I was only a few weeks old so I don’t remember her but this song along with other random stories, comments and pictures has helped me build an image of what she was like. I’m now a big Cyndi Lauper fan which makes my mum happy.

Where would I be today if it wasn’t for the best girl band ever the Spice Girls? I was their biggest fan. I had the Impulse special edition Spice Girls deodorant, I collected the pictures in the official photo album (I still have it) and every chance we got, my friends and I would dance to our favourite song Wannabe. I even dressed up as Sporty Spice at a costume party a few years back. These days I’d rather die in a house fire then listen to put-together bands like One Direction but ahhhh the Spice Girls were different.

It was a full house for Radiohead’s show in Melbourne

I thought I was cool in high school because my favourite band Blink 182 was in the alternative section of Sanity, along with other bands such as Green Day and Silverchair. By the end of high school I had stopped recording my favourite pop songs off the radio on my tape deck every Sunday. I was no longer singing into my hair brush, I was jumping around to What’s My Age Again and slamming my bedroom door because no one understood me.

In college I hung around with the muso freaks, as we were called. We loved our black t-shirts and couldn’t get enough of Radiohead, Muse and NIN. Seeing Radiohead play Karma Police felt like I’d finally completed a chapter in my life, as I didn’t get to see them last time they were in Melbourne, but not from a lack of trying. Coming to Melbourne from Hobart to see a band is a massive deal. I borrowed money, took the boat over and was on the way to the concert when I found out Thom Yorke had cancelled due to his throat. I was gutted to say the least. I managed to get someone to buy me a bottle of scotch and I just sat in my hotel room and got drunk.  I would have looked pathetic.

Moving to the big smoke

When I left Australia in 2009 it was the first time I had ever left the country so I was a mixture of nervous and excited. I was halfway through my flight to Singapore when I got restless as I’d never been on a flight longer than 2 hours or so before.  I decided to listen to my iPod and the first song that came on was Speed of Sound by Coldplay. There is something about this song that both calms and energises me. Speed of Sound will forever remind me of trip away and doing what at the time had seemed to be unimaginable – living overseas. 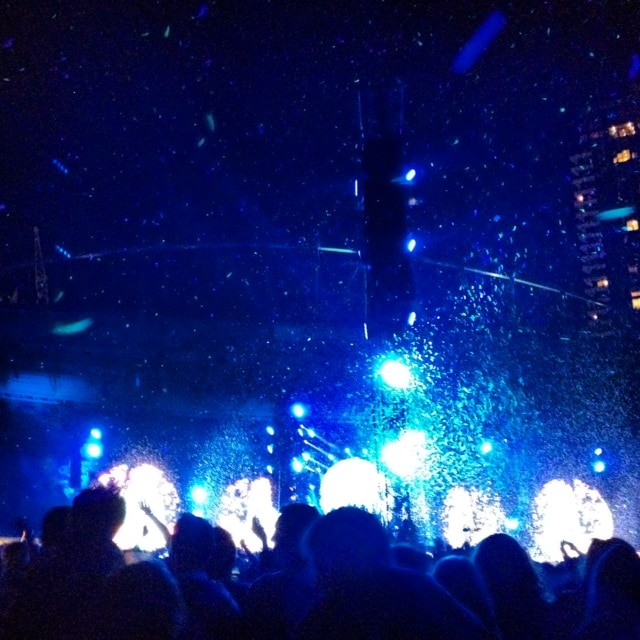 Lights and confetti were only part of Coldplay’s show

Every couple has a song and as a woman you often get asked by your girlfriends what it is and then they ohhhh and ahhhh and say, ‘oh isn’t that sweet.’ I hate having to answer that question as mine and my boyfriend’s song is Meds by Placebo. If you’ve heard it you wouldn’t describe it as sweet. Placebo is our favourite band and before we were together we’d drive around singing their songs and telling each other about our day. When I moved to Europe we had a falling out and upon returning to Australia we discovered that we didn’t listen to Placebo once when we were fighting and only began listening to it again when we started talking a few months before I came home. Now days we only listen to them on occasion, but our dream is to see them play live together.

I can’t explain why but my favourite song is Nothing Compares to You by Sinéad O’Connor. It’s such a classic love ballet. In the past when I’ve had a break up I put this song on and it sums up exactly how I feel. For about five years I didn’t know the name of the song but I’d hear it randomly on the radio always at the worst times too. I heard it once on the bus just after I had spoken to my ex and found out he had a new girlfriend.  I managed to walk away calmly but then I sit on the bus for an hour and try and not cry before I got home, pass my mum and into my bedroom. I just made it. My brother actually hunted down the track for me to cheer me up after one particularly horrid breakup. I played it over and over again until I thought the neighbours were about to come and bang down my door.

What songs bring back memories for you?