It’s all downhill from here
4 Comments 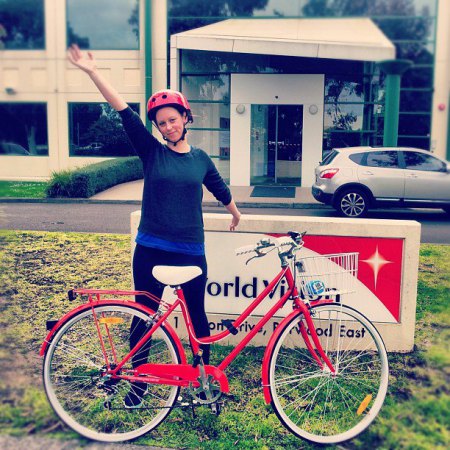 A few weeks ago I decided that I needed to start getting my ‘summer’ body back. I figured I’d need to do at least four hours of exercise a week to achieve this. Don’t ask me how I decided on four hours. I think I had a glass of wine in one hand and a box of shapes in the other at the time. So two hours to burn off each seemed like a logical equation.

To be honest the thought of heading to the gym after work doesn’t appeal to me.

I’m all for running on the spot surrounded by buff people as I watch Rihanna’s latest music clip (They put those dance tracks on so you think to yourself mmm wish I looked like that I need to work out more right?!), but on a Saturday. Not on a Wednesday when I’ve just spent 8 hours at work.

Then I got the bright idea to ride to work. I work out in the burbs of Melbourne so I actually have to travel a fair distance even on a bike. I estimated it would take me roughly 3 hours return trip. So if I did it at least once a week I’d nearly have reached my goal of four hours. Brilliant. I was sold on the idea. So I brought a bike. I picked up a lock, helmet and light so I had no excuse not to ride.

So yesterday I took the plunge and told myself it would be a lovely ride and I’d feel all energised and come 8.30am when I started work. Yeah…well it wasn’t really that lovely.

You see what I didn’t realise until I got to work was that I had committed myself to an 18km ride. Yep 18km. Now everyone thinks Melbourne is flat and it is in the city but not so much out in the burbs. Trust me there are some killer hills. There’s one that gradually gets steeper and stretches out with no end. I had to get off my bike and push it up the hill in an attempt to stop the Up n Go (the irony of it) I had chugged just before I left the house. I didn’t want to get half way to work and feel faint. Instead I struggled to keep the breakfast drink down. At one point I thought to myself this is it. I’m going to vomit. Do I do it in the gutter or try and pretend I’m looking at something on my bike and shield the mess from the road with my body? Instead I just burped. Most of the ride however is on a bike track through the bush and follows a little creek. I know you’re thinking ohhhh how nice and relaxing. Well I’ll stop you right there.

I managed to swallow a bug causing me choke, at which point I lost control slightly and blinded by the sun I barely missed an elderly lady power walking.

True story. I’m not sure who was more shaken up. I ended up reciting ‘are we there yet’ in my head for about the last 15 minutes of the ride. I was no longer worried about who was going to see me red faced, sweaty and in my gym gear I just wanted to get to work so the torture could end. Then I saw the office. Wow I’d actually made it. For the rest of the day I umd and rrd if I should attempt the ride home or just tram. I wasn’t sure if my fragile stomach and jellified legs could take it. But after being told it was all downhill on the way back I thought I may as well get it over and done with.

The way home was the opposite of my morning. The sun was shining, there was a slight breeze and that hill I couldn’t make it up, well I coasted down it in minutes. I even got to watch the sun set. Beautiful. I was on the home stretch and it felt good flying past the cars backed up in peak hour traffic.

The moral of the story? Pushing yourself can hurt, literally. When a friend asked if I will ride next week I said yes. Not particularly looking forward to it but I really want to be healthy.  Getting motivated was the hard bit. From now it’s all downhill!