The mysterious world of the connected teenager
0 Comments 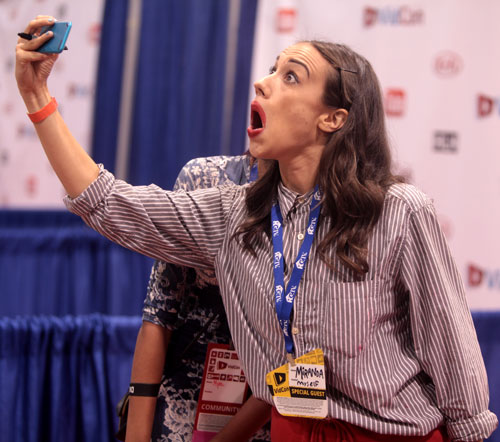 I’ve come to the conclusion that I am disconnected from the world of teenagers. I’ve recently moved jobs and as a result, my route to work and timings has changed. I now get to enjoy the full public transport experience Melbourne has to offer which involves me perfectly timing three tram connections. This on occasion, has involved me running through red lights and literally launching myself through tram doors as they are closing with the hope I survive with all my limbs intact and don’t knock any unsuspecting victim over. More often than not though, my timings off and I end up hanging around at tram stops with nothing to do (I am still trying to be bored graciously and not use my phone at every idle moment). This has allowed me to get a glimpse into a teenager’s world which until recently I knew nothing about. Only on Monday I heard a conversation between two girls and it went something like this:

Girl 1 – Yeah she doesn’t even have many friends she’s got like a 100. God why doesn’t she realise no one likes her…

I kid you not these girls actually said BRB and LOL. At no point did they actually laugh out loud.

This made me worried. Maybe it’s true that social media and online communities are altering language and the way we interact and form relationships. On Tuesday I became even more worried when I noticed two guys sitting next together on the tram, they didn’t say a word to each other as they were too busy scrolling the web on their phones. Occasionally one would lean over and show their phone to the other, who would then nod, smile or shrug and then they would go back to sitting there engrossed in their online world while being absent in the real one.

A study recently profiled on Mashable stated 49% of those teenagers surveyed said they prefer to communicate face-to-face and one-third of them said they desire time away from the Internet. This generation of teenagers have been connected since toddlers so it would make sense that they would be one of the first groups to get digital fatigue. What I found surprising was that 36% of teens who responded said they wish “they could go back to a time when there was no Facebook.” I think teenagers like Natalie would agree.

When I was a teenager I remember racking up mum’s phone bill on three way conversations or getting angry because she didn’t wake me up when a friend called “as I looked like I needed the sleep.” I think we’d all agree mums are never great for your social life when you’re a teenager. Or MSN chat that I would sneakily have open in computer class so my friends and I could send each other answers to the test. For me the online community was an extension of the real world not the other way around. I think this is what some teenagers are starting to see.

And finally I’m still curious as to what teenagers carry in their school bags. Seriously those bags are twice the size of them and are really heavy. I’d know as I get hit by, or trip over one, at least once a day in my daily tram journey. The life of a digital native teenager remains a mystery to me.